Home // Past Productions // The Lady Vanishes 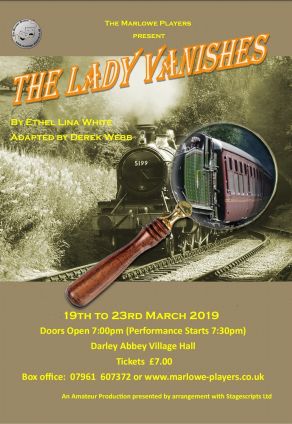 Iris Carr is a wealthy socialite and we meet her as she faints with sunstroke waiting for a train to take her back to the UK after holidaying in Eastern Europe. Once on the train she is in a compartment with a honeymoon couple, an austere Baroness, a formidable looking Doctor, and an elderly lady with an eclectic dress sense, Miss Froy.

She befriends Miss Froy who tells her that she was a governess for an important family in Moldavia, but is now between jobs and is journeying back to England to spend some time with her parents. Shortly after, Iris falls asleep and, when she wakes, is surprised to find that Miss Froy is no longer there. But, when she asks the others where Miss Froy has gone, she is astonished that they deny she was ever there!

She is helped by a young musicologist, the two proceeding to search the train for clues to Miss Froy's disappearance.