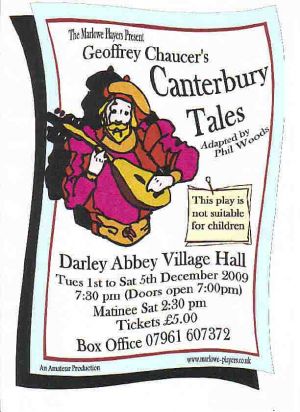 Geoffrey Chaucer's famous "Canterbury Tales" have been skilfully updated for the stage by Phil Woods retaining all of the spectacle, humour and bawdiness of the fourteenth-century original.

The Marlowe Players will be presenting a selection of the "Tales", including the Miller's, Wife of Bath's, Franklyn's, Knight's, Pardoner's and Reeve's tales. These are a masterly collection of romantic, moral and farcical stories which promise to provide colourful and good-spirited entertainment.